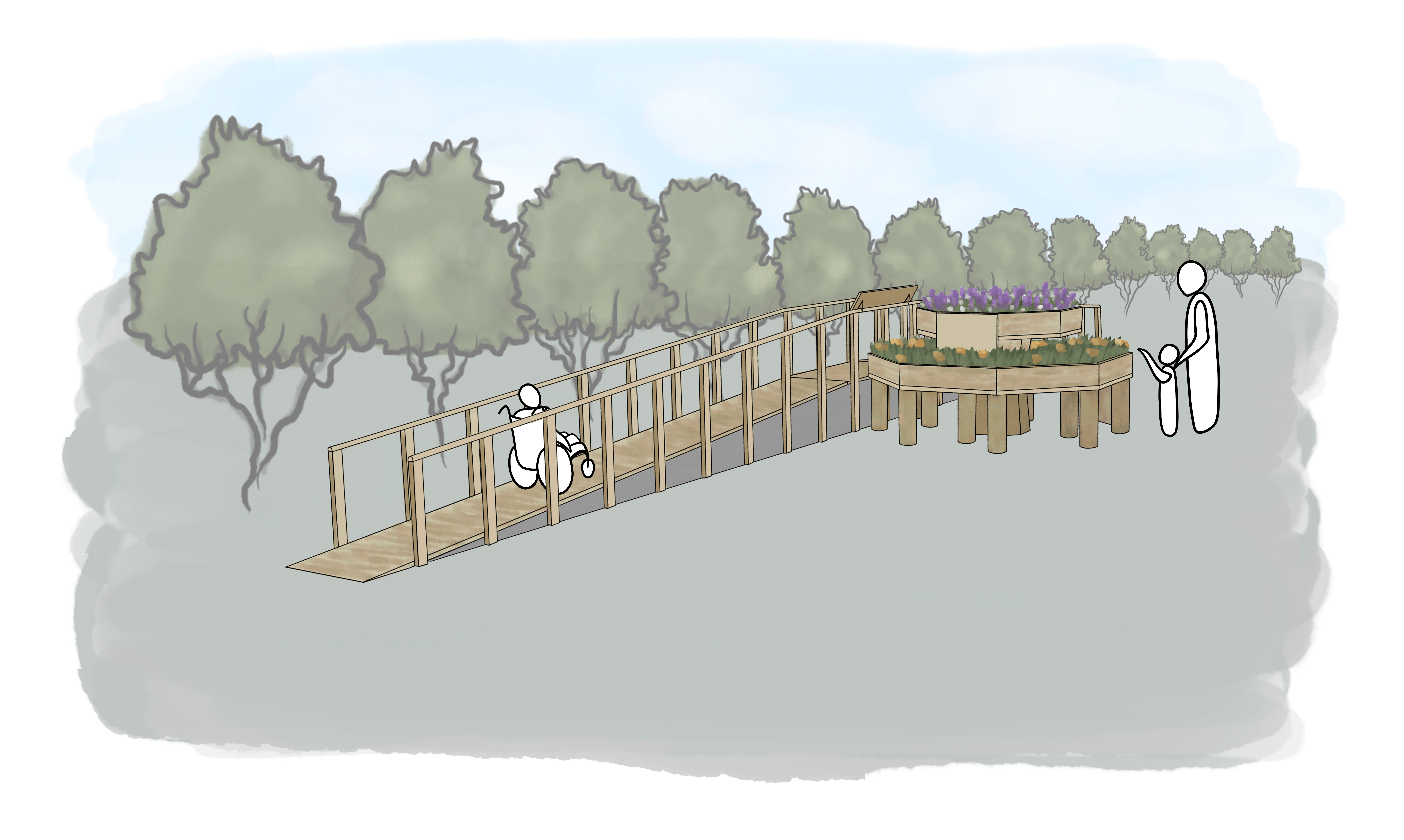 Recently, I’ve been taking a lot of walks around the neighborhood and enjoying the scenery of my neighbors’ yards. I have particularly enjoyed yards in which it is clear the owners have deliberately planted native plants. In an area as drought-stricken as California, planting natives can help conserve water, reduce maintenance, and encourage local pollinators. Makes sense – the plants would have been living here anyway without us humans!

This, along with some inspiration from the work of MICRO and BioJam, led me to wonder: how might we create a fun, interactive, community exhibit based on the celebration of native plant life?

I began with some inspiration from the California coastal oak tree. Often when thinking of the trees of California one might first consider the redwoods, but its very vertical aspect ratio makes it difficult to properly display plants. The coastal oak tree is equally magnificent, and its wider branches make for a more accessible platform. 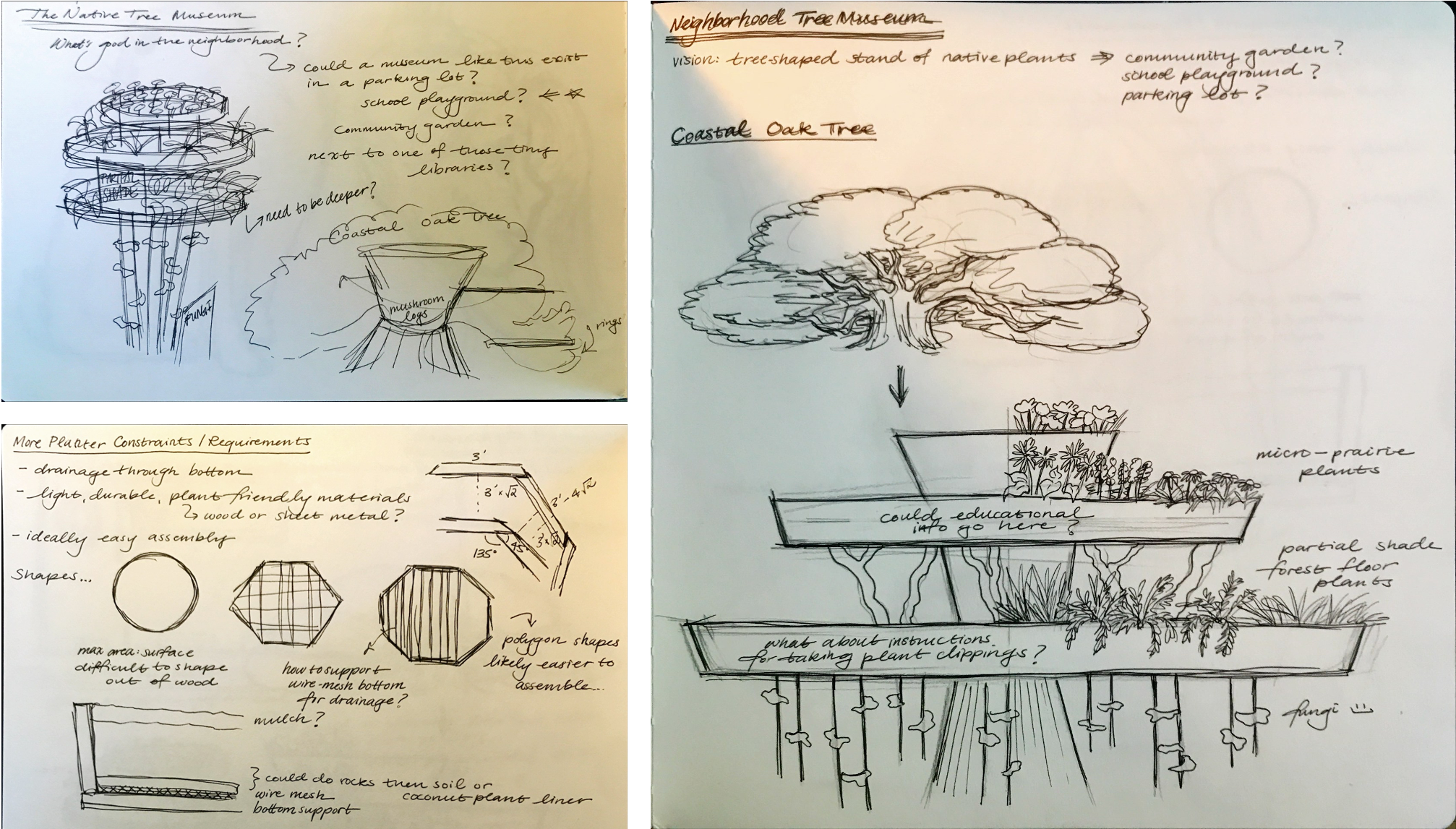 For the actual structure, I wanted to create something that balanced the grandeur of viewing a tree with accessibility so those of most viewing heights can enjoy it. I also liked the idea of building planters that emulated the rings of a tree and the wide reach of the coastal oak’s branches. Finally, I wanted it to be possible for a community with some handiworkers to assemble it themselves: imagine a beautiful afternoon during which members of the community garden or local elementary school put together their very own Native Tree Mini-Museum, and the kids are able to plant some native plants themselves.

With these requirements in mind, I began drafting 3D models using CAD.

Though I had originally imagined huge rings of planters hanging like branches off of the main structure, I quickly realized that a massive round planter would be prohibitive to both ship and assemble. I thus altered my original design to be an octagonal structure – still quasi-circular in feel, yet able to break down into flat parts for shipping and assembly.

Furthermore, I realized that in order to actually enjoy the plants in the planters they could not be that high off of the ground. I spent some time familiarizing myself with the Smithsonian’s guides for creating accessible exhibits, and came to the conclusion that the bottom layer should be 30” high at max and that there should be a ramp for viewing the top layer of the tree, with the top layer also being 30” above the ramp platform at max. I also incorporated signage for the various layers.

In my imagination, communities with access to branches from the local flora could incorporate those into the supports between platforms. This idea would need further consideration and discussion with local experts and community leaders on feasibility.

Designing for Transport and Assembly

As mentioned in the above section, I created the shape of the tree with shipping and assembly in mind. While assembly would still require some tools and would certainly be made easier with the help of an experienced woodworker, I wanted to create an assembly with consistent, standardized parts that could pack flat into a shipping container and be assembled on site with basic tools. With some inspiration from a certain Scandinavian furniture company, I was able to come up with a set of standardized wooden boards, connectors, and slats that can (hopefully) be intuitively assembled.

Briefly, all screws and washers are avilable on McMaster-Carr and basic mechanical analysis shows that the fasteners and construction should easily support the weight of the wood as well as the dirt and plants eventually going into the planter.

This is a first pass at creating an easy to assemble construction. I would want to actually interview and workshop with potential users before finalizing this assembly design.

Finally, the fun part of this whole thing – the plants! Plenty of resources are available online (like this webpage for determining appropriate plants for a native plant garden depending on the amount of sunlight and climate of your surroundings.

That said, I believe that the most interactive and exciting way to go about putting the plant touches on this exhibit is to hire a local horticulturist or botanist and educator to instruct participants on the local flora and how it responds to the environment. That way the whole process can be based in the community members, leading to a greater sense of ownership and pride.